I can't believe how much their writing has improved! Super clear and cursive! Perfect!

We are learning to write a story with a historical setting and 5P are especially enjoying reading Oliver Twist by Charles Dickens. We have been investigating how Charles Dickens helped create a picture of the world he lived in through the descriptions in his written words.  We have also identified how he created suspense and tension through imagery, detail and manipulating the speed in which the action develops.

Role-play Oliver locked away for asking for more! Read our fantastic suspense writing...

CREAK! What was that? Oliver’s eyes, which were now blood-red and sore from crying, darted around the pitch black room. Nothing. As he tried to shut out the dark thoughts from his mind, he drew his grazed knees closer to his chest, which was pounding faster and faster. Creakkkkkk! There it was again. Only louder. This time the strange sound bounced off the stone walls of the dark, solitary room. Sweat poured from his forehead and his heart was ready to pounce out of his body. By now, Oliver had drifted against the wall in fear and his back sat firm against the stone cold wall. Frightened and cold, the little weak boy tried to raise his trembling hands to pray. Impossible. Sorrowfully, Oliver, who was extremely malnourished from the slow starvation at the workhouse, began to realise just how weak he was. Even raising his little bony hands was painful. So, he decided to close his eyes tight shut, however this made him panic even more. Crying bitterly, he eventually managed to cover his strained eyes with his cold, clammy hands. 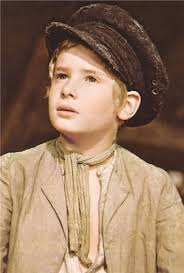 Oliver Twist is a young, orphan boy, who is left roaming the streets of London after a terrible encounter at a workhouse. Sadly, this ragged, weary boy was treated with cruelty at this establishment, which led him to escape to seek happiness and freedom in the city of London.

Oliver is a petite, blonde boy with shaggy, unkempt hair and large blue eyes that tell a sad story. As he has no carer or guardian to see to him, the button-nosed boy is affected by hunger, poverty and homelessness. Extremely thin due to the slow starvation at the workhouse, this under-nourished boy has pale smooth skin that is covered in dirt and grime due to living in the streets. In fact, this weak boy is so pale and malnourished that his once clean shirt (now battered and worn) hangs off his bony, skeletal frame and his dirty trousers are clearly several sizes too small for him.

Filled with grief and isolation, Oliver appears depressed and withdrawn even when surrounded by throngs of people. As he has not had the love of a family or positive role models in his life, the polite, honest boy is gullible, naive and impressionable, which means he is easily manipulated into doing wrong. An example of this is when he is targeted to be used a pickpocket for a gang of criminals led by a villainous ringleader. However, this is not a reflection of his character as there is no one more honest and kind than Oliver. Despite his unfortunate past, this polite boy possesses immaculate manners and kindness that shines through him no matter who he is with.

A new reading area in 5P! How cosy, colourful and inviting does it look? Would you like to be lost in a book in this reading area? Let us know your thoughts.

Unfortunately not the ones with chocolate chips.

Some cookies are necessary in order to make this website function correctly. These are set by default and whilst you can block or delete them by changing your browser settings, some functionality such as being able to log in to the website will not work if you do this. The necessary cookies set on this website are as follows:

Cookies that are not necessary to make the website work, but which enable additional functionality, can also be set. By default these cookies are disabled, but you can choose to enable them below: